The gender wage gap: Are we making progress?

Gone are the days when women were paid less than men, right? Not really, although we are making progress toward equality. From the 1960s through the early 1980s, women working full-time, year-round earned approximately 60 percent of what men were paid. Now, according to the U.S. Census Bureau’s 2018 American Community Survey, women’s average pay is still 18 percent less than that received by most men in the U.S. Clearly the gender wage gap still exists. In addition to harming women, it hurts businesses and the overall economy. But first, some numbers. 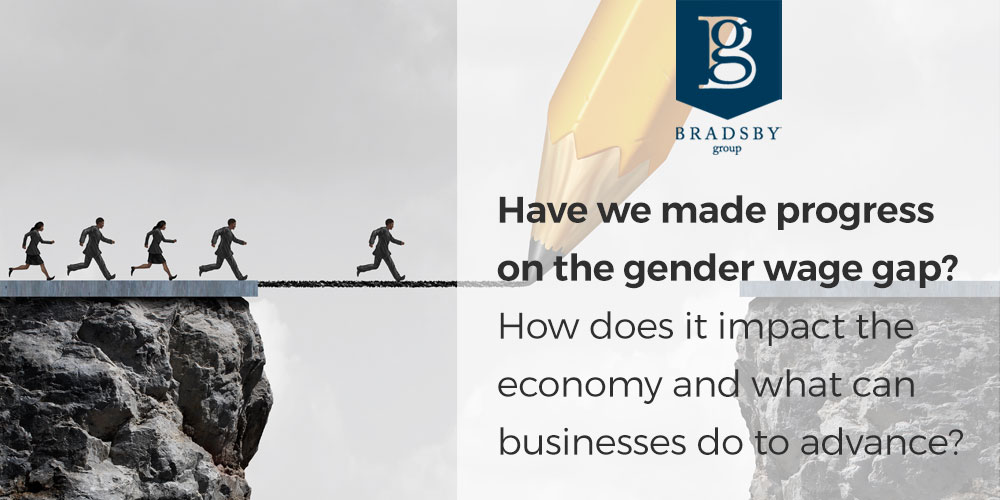 The gender wage gap by the numbers

Research from the U.S. Census Bureau, as summarized by the American Association of University Women, found that American women in 2018 earned between 54 to 90 percent of their male counterparts’ median annual pay.

Women aged 25-34 have the smallest pay gap, earning an average of 89 percent what their male counterparts make. The largest gap exists for women aged 55-64, which points to the phenomenon of women falling behind in compensation the longer they work.

Can the gender wage gap be explained away?

Is the gender wage gap about the choices of women to concentrate in specific occupations? Jennifer Schieder and Elise Gould, in an article for the Economic Policy Institute (EPI), say no. A woman’s “occupational choice is the culmination of years of education, guidance by mentors, expectations set by those who raised her, hiring practices of firms, and widespread norms and expectations about work–family balance held by employers, co-workers, and society,” they write. “In other words, even though women disproportionately enter lower-paid, female-dominated occupations, this decision is shaped by discrimination, societal norms, and other forces beyond women’s control.”

The Census Bureau research gives evidence that women’s earnings in these gender-concentrated fields aren’t less because the jobs “require fewer skills; they pay less because women do them.” How can they tell? “When an influx of women enters a previously male-dominated profession, wages for the occupation as a whole decrease.”

In their bestselling book, Women Don’t Ask, authors Linda Babcock and Sara Laschever argue that discrimination isn’t the only factor at play in the gender wage gap. They argue that in highly skilled professions, a significant amount of the salary comes down to one-on-one negotiations when the job offer is made. In fact, data shows that the highest gaps in wages often occur in high-skilled professions. Over decades, the way a woman negotiates can adversely affect her salary, annual bonuses, and even opportunities for promotions. In many cases, women tend to ask for less when they are negotiating with a man, than when they are in a negotiation with another woman.

Another reason often given for the pay discrepancy is that motherhood interrupts a woman’s career. Yet “mothers receive lower salaries than fathers and other women – even if the mother never left the workforce,” according to the Census Bureau report. In fact, mothers who work full-time average 69 percent as much pay as fathers.

How does the gender pay gap impact women’s economic well being?

Single mothers make up a significant proportion of working women. Providing for their families on one income is already a huge challenge without receiving less than what a man would earn. Even in two-parent homes, today’s economy makes two incomes more necessary than ever.

And then there is retirement. The more a person earns, the more Social Security and pension benefits they will receive. The more one earns, the more one can save in private investments, too. Therefore, because women earn less than men, they have less available when they retire. This extension of the gap impacts their children’s generation as well.

How does the wage gap impact businesses?

Major employers have made the news when they’ve been hit by high-profile gender discrimination lawsuits. These can be crippling not only for the financial liability, but also for the negative publicity.

Conversely, closing the gap increases a company’s competitive edge when it comes to hiring, ensures that all employees can reach their full potential regardless of gender, and improves their loyalty and retention.

How does the gender pay gap impact the economy?

Think what a household could afford to buy in just one year if the wage gap were closed. Last year an article in Fast Company spelled it out. Using 2018 numbers, the average working woman could afford:

Societal attitudes toward the value of work are a root cause of the ongoing wage gap. Individuals can examine their beliefs and learn to recognize personal biases, but until businesses review policies and practices with an eye toward structuring them to support equal pay, the wage gap will continue to manifest.

Bradsby Group is committed to equality in recruiting the best talent to build the teams our partner employers need for success. Whether you are looking for a great fit as a job seeker, or as an organization, we can help. Contact our recruiters today.