4 tips for managing invisible labor in your business

by [email protected] in News 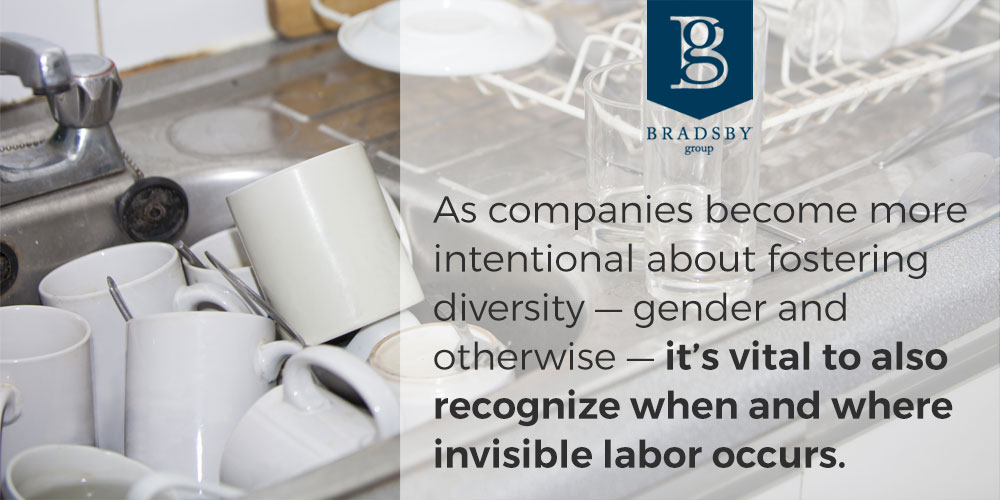 Four years ago, an often-referenced Sheryl Sandberg and Adam Grant article for the New York Times addressed these types of “housekeeping” tasks that all workplaces need to run smoothly. The article cited multiple studies to show that when helping is part of the corporate culture, success metrics including profits and productivity rise.
The Sandberg and Grant article, like most of the literature since then, makes the point that women, too often, are expected to do most of the invisible work. “When a woman declines to help a colleague, people like her less and her career suffers,” they wrote. “But when a man says no, he faces no backlash. A man who doesn’t help is ‘busy’; a woman is ‘selfish.’”
Invisible labor, or “tending,” should not, but often does, default to those with less perceived power, whether related to gender, tenure, or race/culture. It is also often emotional labor, says Julia Carpenter writing for CNN Money. She quotes psychotherapist Christine Hutchinson, who has counseled women on how to recognize the toll these types of labor take on their energy: “I do work with a lot with women on being able to build the capacity to make other people uncomfortable,” because even naming the problem takes courage.
As companies become more intentional about fostering diversity — gender and otherwise — this important, yet often unrecognized, work will hopefully be shared and compensated more equitably.

How to make invisible labor equitable

Management and employees can both play a part in improving the balance of who does invisible labor by taking the following actions.

Don’t leave it to chance, and don’t assume the person who usually brings cookies for birthdays always wants to. For example, intentionally assign men to take notes at meetings as often as you assign women to this task.

Shine the light on invisible work.

“‘Tending’ work can include simple things such as a morning greeting from a boss that helps reduce employee stress and boosts morale, and mentoring that builds skills and creates new opportunities,” writes Lydia Dishman for Fast Company. Acknowledge and reward the tending-type tasks publicly, from the CEO down.
Appropriate recognition of invisible work is one way to prevent discouraged employees. The benefits of high morale – talent retention and productivity – are worth the effort.

Rather than allowing resentment to build when habitually asked to do tasks that require unpaid time or take away from accomplishing your own work, speak up using one of these approaches.
First, offer reciprocity if it involves a coworker: “I’ll do it this time, and then you can do it next time.” If that doesn’t work, calmly stand up for yourself and decline the task, remembering the advice of Hutchinson to not feel it’s your job to always relieve others’ discomfort.
Another option is to make the case to management for the value or cost of you doing the task: either it adds something for which you should receive additional compensation, or it takes away from you getting something done of more value. You might even be able to leverage that conversation into negotiating a promotion.
Finally, Dishman says, it might help to “serve up a smart comeback.” As an example, she quotes a lawyer who would say, “I’m not sure you want someone with my hourly rate making coffee.”

Having the right people on a team will boost individual and group performance as well as job enjoyment. Let us put our expert recruiters to work helping you find the talent you are looking for. Contact us today!