5 ways to support & develop women in the workplace

Women in the workplace want and need the same treatment and opportunities as men. Yet even with laws in place to protect the rights of women at work, the playing field is still far from level, no matter what we would like to believe.
We are living in a time of heightened attention to what some call women’s issues in the workplace. Yet they aren’t women’s issues — they are everyone’s issues. Workplace cultures that support equality are good for men too, making them twice as likely to rise to senior management, says Michelle King for Forbes. How can businesses manage staff and create a culture in which women and men both can rise as far as their talent will take them?

5 key areas of focus for supporting women in the workplace

Focus on the position — and then pay equally

The first step is to hire, promote, and pay equally based on position and skills — and eliminate gender bias. LeanIn.org, an initiative of the Sheryl Sandberg and Dave Goldberg Family Foundation, reports that studies “found that replacing a woman’s name with a man’s name on a résumé improved the odds of getting hired by 61 percent.”
According to CNBC, leveling the gender pay gap would have an enormous impact, adding an estimated $512.6 billion to the U.S. economy alone.Try to create gender-blind performance and hiring processes based on specific criteria rather than subjective evaluation. We all tend to have blind spots, so educate your team on gender bias, and model the vulnerability of self-awareness.
Give women equal opportunities to exercise leadership. For instance, in meetings don’t always assign note-taking responsibilities to women. As LeanIn.org points out, “the person taking diligent notes in the meeting almost never makes the killer point.” Distribute these support tasks along gender-neutral lines.
Hiring and promoting more women into executive roles will help create a culture in which female leadership is respected and other women have the confidence to shoot for advancement. 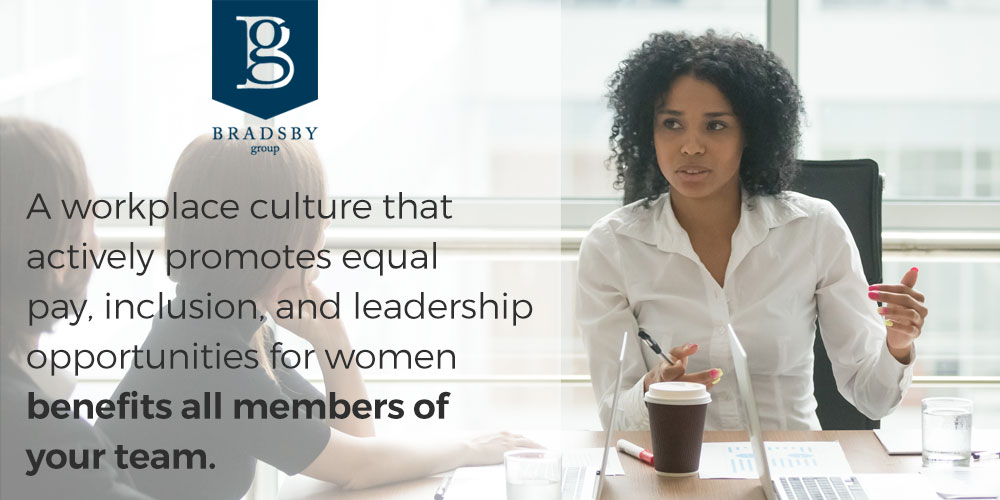 Focus on giving everyone in the room a voice

One of the most common complaints women in the workplace make is not feeling heard by their male colleagues and supervisors. Men talking over women in meetings is still too common. If you observe this happening, redirect the attention back to her and ask her to finish.
Another common experience in meetings is for a woman to share an idea that goes unnoticed, only to have a man then share the same idea and get recognized for it. If this happens in your presence, immediately and publicly ask, “How is that different from what [name] just said?”

Women in the workplace experience the strongest gender bias when they become mothers. At that point, they are seen as less committed to their careers and even as less competent. Ouch!
Writing for Fast Company, Melissa Locker states, “In 2015, 69.9% of mothers with children under age 18 were in the labor force, but mothers are less likely to be hired for jobs, less likely to be perceived as competent in the workplace, and typically will be paid less than their male colleagues with the same qualifications.
And, according to Locker, “A recent study found that while men’s earnings increased more than 6% when they had children (if they lived with them), women’s wages decreased 4% for each child they had. The so-called parental pay gap persisted even when controlling for factors like experience, education, hours worked, and spousal incomes.”
For the benefit of all, establish a work climate that supports both moms and dads as family leaders. Make no assumptions about anyone’s interest in travel, promotion, or extra work. Instead, encourage open communication around options and needs. Maintain your own family priorities as an example.

Focus on level expectations and evaluations

In evaluations, men are more likely to have their performance and contribution overestimated, women are more likely to have theirs underestimated. This ought not to be.
In a 2017 article for Harvard Business Review, Paolo Cecchi-Dimeglio, a behavioral economist and Senior Research Fellow at Harvard, presents evidence of the subjective gender biases that all too often play a negative role in performance reviews — and as a result women in the workplace are often shortchanged. Cecchi-Dimeglio’s study found that women were 1.4 times more likely to receive critical subjective feedback, as opposed to critical objective feedback or positive feedback.
Level the effect of likeability in evaluation language. According to LeanIn.org, successful men are judged by peers to be more likeable, while successful women are seen as less likeable: “This trade-off between success and likeability creates a double-bind for women. If a woman is competent, she does not seem nice enough, but if a woman seems really nice, she is considered less competent.”

Focus on safety with inclusion

It’s not enough to not harass. Call it out if you see it. Report it. Be an ally for women in the workplace. Take the lead in creating policies that insure transparency and accountability.
But do continue to include female colleagues and employees in workplace social activities and mentoring relationships. Prohibiting these mixed activities can seem like the thing to do to avoid any question of misconduct, but its effect can limit women’s networking and career development. A better solution is to treat everyone the same: If you won’t meet alone with someone of another gender, don’t meet alone with anyone. The best defense against an accusation of harassment is to behave above reproach, with self-control and equal professional demeanor toward all.
Managing women is no different from managing men, except that ingrained gender bias needs corrective measures. When men and women in the workplace both thrive, their organizations thrive.
Bradsby Group strives to recruit all-star candidates, without regard to gender, who have the strengths you need on your team. Contact us today to share your objectives and begin your search.