How to Stop Micromanaging and Develop Leaders

Anyone who has been micromanaged has a clear picture of what it is. But micromanagers themselves are notoriously oblivious that they’re doing it. This Harvard Business Review article on on how to stop micromanaging, written by Muriel Maignan Williams, executive coach and leadership development author, lists six signs.
You’re probably a micromanager, she says, if:

Attention to detail is a good thing, but micromanaging takes it to a destructive level. Instead of positive outcomes, it delivers negative impacts on three levels; the team, the organization, and the manager. 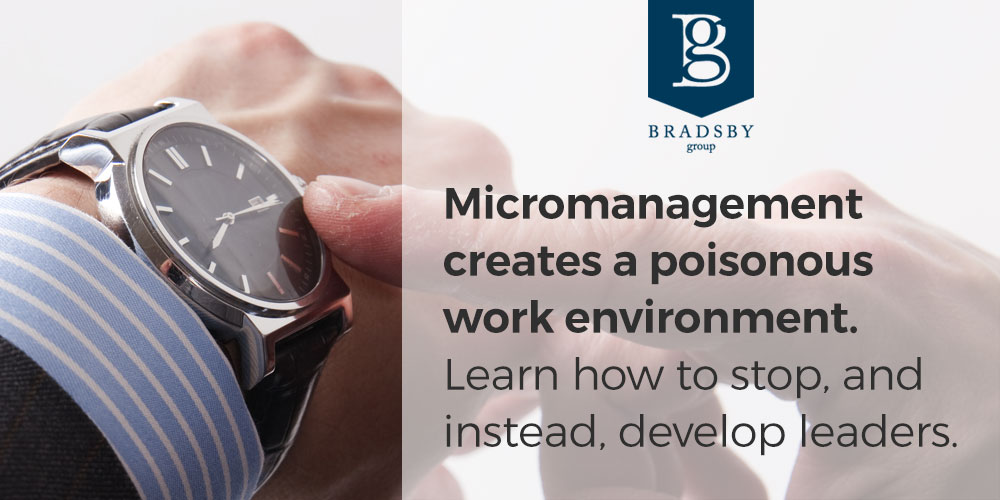 It stunts employees’ development. “Development is about growing confidence in what ou do,” says HR Digest Editor Priyansha Mistry in an article called “The Real Cost of Micromanaging.” Micromanaging “takes away their natural or unique contribution and frustrates their ability to work independently or without supervision.”
It demotivates the team. Says Mistry, “Micromanagement builds a corporate culture without trust and confidence in the employee.” People who aren’t trusted don’t feel valued, and that will suck their motivation dry.
In a 2012 study by The American Psychological Association, 93 percent of the employees who reported feeling valued at work said they were motivated to do their best work.
Every team benefits from employee dedication and creativity. What micromanaging will produce instead is people doing the bare minimum to keep getting a paycheck.
It harms health. Being micromanaged raises stress hormones and can have significant health ramifications. Even the micromanager who is trying to control everything experiences more stress than necessary.
It hinders leadership at both the management and direct report levels.
Simon Sinek, author of Start with Why and Leaders Eat Last, says it well: “When we tell people to do their jobs, we get workers. When we trust people to get the job done, we get leaders.”
“Leadership is hard work,” says Sinek. “Not the hard work of doing the job—it’s the hard work of learning to let go. It’s the hard work of training people, coaching people, believing in people and trusting people.
It contributes to turnover. The APA study cited above also found that half of the employees who reported not feeling valued said they were planning to look for a different job within the year. Is that what you really want when talent scarcity is a major challenge?
It makes your organization vulnerable. The manager is not investing time in higher level leadership and the team is not learning to function independently. The resulting under-performance costs the business time and money as well as its reputation as a good place to work.

How to stop micromanaging

Helping you find managers for your team who are also good leaders is at the heart of our mission at Bradsby Group.  The result is that you then attract and retain more talented individuals who share your commitment to your company. Let us help. Contact one of our recruiters today.