Have you ever been ghosted? No fun, is it? It leaves you hanging, not knowing how to proceed.
Let’s turn the tables. Have you ever ghosted someone?
It is decidedly not a smart move to ghost a recruiter or potential employer.

Stood up, ignored, no-show – for those new to the term, which showed up on Dictionary.com in 2016, that’s what ghosting means. Its original use was in the world of dating apps, but now the term and the behavior is seen increasingly in staffing circles.
Someone shows interest in a job, is interviewed, and then poof, they disappear. They don’t respond to emails or voice mails, even ones with a job offer. They don’t show up on their first scheduled day or any thereafter. If they are employed, they leave work one evening and never return, never to be heard from again.
Recruiters and HR managers report that ghosting by job candidates, and even employees, is becoming a serious strain on their hiring processes. Hard data is lacking, but the phenomenon is having enough impact that it showed up in the Federal Reserve’s Beige Book this past December as a staffing challenge. 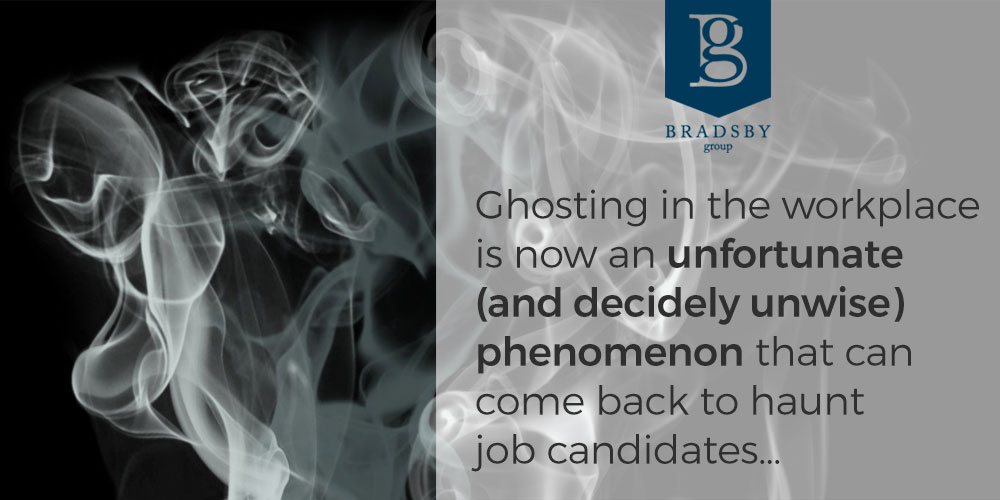 Who is ghosting, and why?

It’s not just low-paid or young workers who are dropping out of sight without further communication, either. “In fields ranging from food service to finance, recruiters and hiring managers say a tightening job market and a sustained labor shortage have contributed to a surge in professionals abruptly cutting off contact and turning silent,” writes Wall Street Journal’s Chip Cutter as part of a series called Work in Progress.
We are currently living during a period of the lowest unemployment in nearly 50 years, as cited in this Washington Post article about job ghosting. Candidates have more options than they did a few years ago. Back then, recruiters had so many prospects that they could not realistically reply to them all, and candidates were too often left wondering where they stood and how to proceed.
Now things have flipped with the shortage of workers for the jobs available. It is conceivable that some job seekers get so many offers they can’t track them all. Maybe. But having been on the receiving end of ghosting in the past does not justify or excuse ghosting behavior by candidates.
In fact, ghosting will bite you.

Professionalism has 2 Cs: communication and courtesy

Ghosting a recruiter, potential employer, or even a current employer is highly unprofessional and will likely undercut future opportunities to advance your career. People know people, so when you don’t reply or show up, you are not just shutting down that particular job. Word will get around. This is not how you want to become memorable.
The motivation for ghosting might be to avoid conflict, but avoiding conflict is often the worst way to avoid it.
Instead, communication and courtesy can minimize conflict and, more importantly, demonstrate professionalism and the kind of soft skills that employers value.

As Cutter reminds us, “Careers take many turns; hiring managers and candidates will both likely end up at different companies in the future, so closing the door respectfully is essential.”
Spelling your professionalism with two Cs – communication and courtesy – will help you stand out as an attractive candidate for your next career move. Not doing so will just as surely help you stand out, but in a way that will undercut your success.
Bradsby Group recruiters are committed to practicing communication and courtesy in all of our interactions with both candidates and the companies for which we recruit. Successful placements and professional relationships depend on it. Reach out to our team to begin a conversation about where you want to take your career.